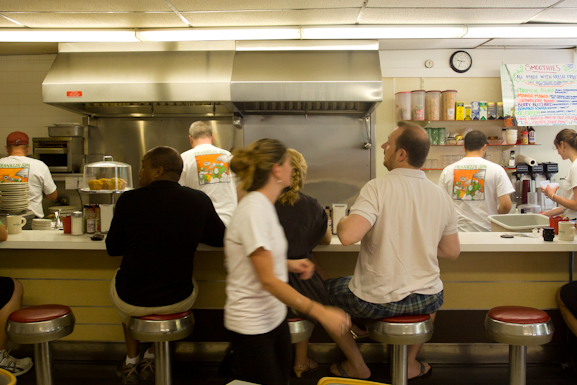 Boston-bound for the summer, Dan, Rudy and I headed east in our loaded up truck, every cranny strategically stuffed with belongings. Before reaching the big smoke, we decided to linger a little in holiday mode and stop in Newport for the night. We woke to a long day ahead and breakfast on our minds. Nestled amidst the quaint, labyrinthine streets of Newport town, the Franklin Spa is an unassuming corner store, whose name seems more like a local aesthetician than diner. “I used to come here and buy candies as a kid,” says owner, Rocky. “It was a little pharmacy and variety store.” Since he left the liquor business 14 years ago (he headed up The Pelham bar, amongst others in Newport), he’s been running this happening little hole-in-the-wall breakfast joint, keeping locals and tourists alike well fed. 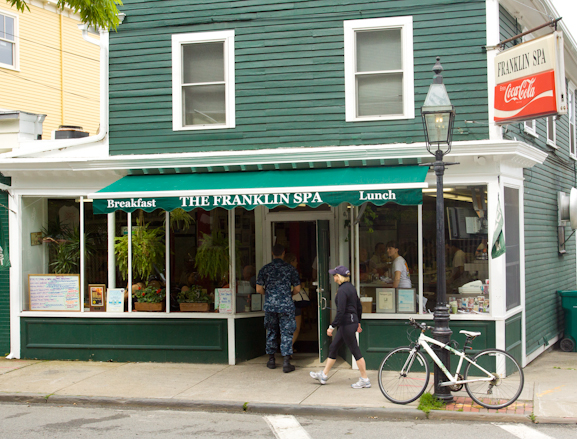 It’s a simple spot – diner counter from which you can watch the eggs flip and homefries sizzle, and little booths and tables perched under hanging plants and specials boards. The staff is a friendly and straightforward local bunch, who chatted with us about the French Open tennis finals on which our eyes were glued most of the time while keeping the coffees filled. In typical diner fashion, the countertops sport collections of condiments, which include Franklin Spa’s house-made hot sauces. 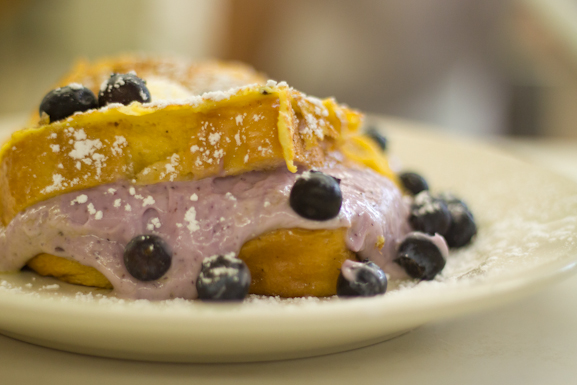 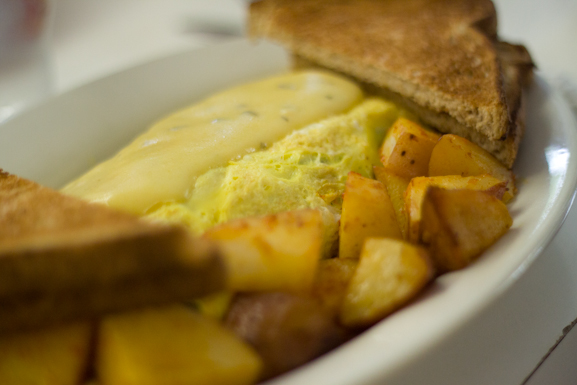 The menu is a generous selection of the usual diner breakfast fare, but direct your attention to the specials page and you’ll be satisfied. Rocky tells me the menu has evolved over the past 14 years, adding specials and gauging the response from customers. But, he assures, “I don’t cook anything I wouldn’t eat myself.” We order the lobster omelet, a hearty roll stuffed with spinach and flowing brie cheese. The lobster found its way onto the menu a couple of years back and Rocky gets it all from the local fishermen down at the Long Wharf. We had heard much about their blueberry-stuffed French toast, and gawked as it arrived, busting at the seams with fluffy, cream-cheesy blueberry. The stuffing had the devilish hint of impending guilt but its dreamy taste was enough to mask it as we munched. Other popular items include the Maryland crabcake and Brenton Reef benedicts, a pile of lobster meat, poached eggs, grilled tomatoes and steamed spinach slathered in hollandaise sauce. Everything’s fresh and arrives on your table in a handful of minutes. 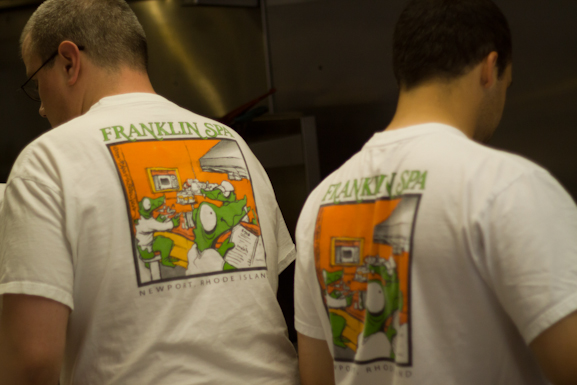 The Franklin Spa as an air of familiarity that makes you feel like you are at your own neighborhood joint. Regulars slap shoulders with the waitresses as they stroll in for a feed, smiling heads nodding hello. Customers are fed speedily, ready for a day of shore-side fun. Rocky seems to have a good thing going on. And for him, it’s just as peachy. “Six until two every day, then I can head out fishing for the afternoon.” Ah, Newport, must the holiday ever end?