A two-wheeled tour of New York 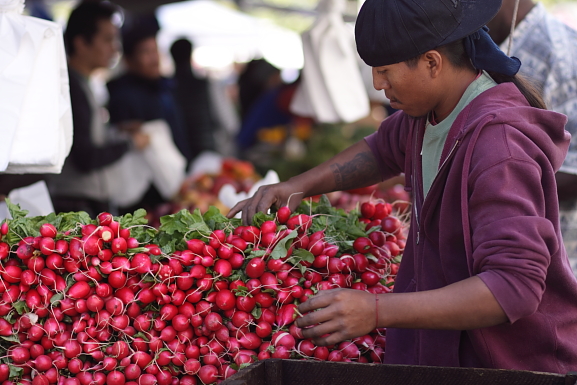 A quick report from New York City…I spent the weekend touring several of New York’s boroughs by bike, which I discovered to be far more scenic and sanitary (albeit are more exhausting) than the subway. Gastronomically speaking, New York’s best stories are often stumbled upon serendipitously, tucked away amidst its criss-cross labyrinth of streets where they await discovery by shrewd hunters. Others, however, occupy the city’s largest public spaces and require you to draw blood to your elbows trying to manoeuvre through the crowds. 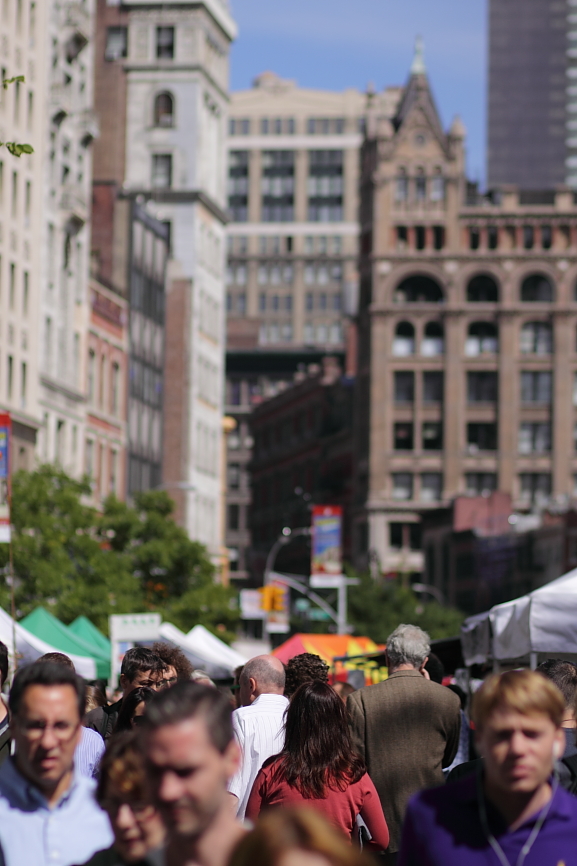 Case in point: Union Square’s Greenmarket on a Saturday. Locals drag around shopping carts, stocking them that night’s dinner parties, parents swan their children around for ice cream and pie, tourists pose for photos in front of stacks of fresh produce. This super(sized) market has been in operation since the 1970s and amasses over 100 regional farmers and food producers. Beyond the usual (but equally enticing) fresh farm produce, you can get your hands on artisan sausages, iced herbals teas, fresh sprouts, kimchi, goats milk ice cream and wild mushrooms, amongst other delicacies. 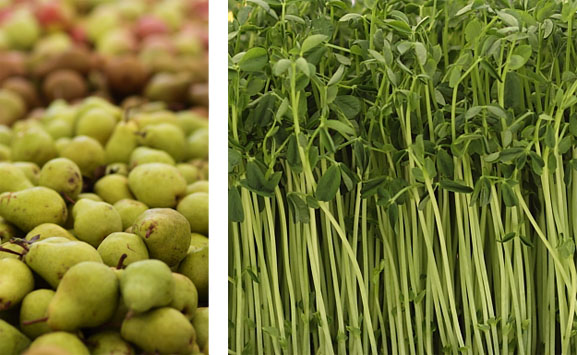 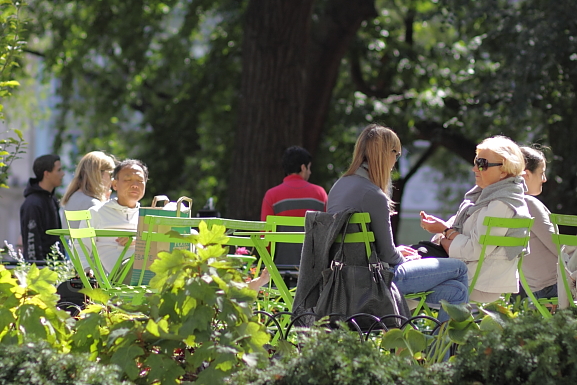 Once you have battled the crowds, take a seat under the expansive canopies of Union Square Park and enjoy your newfound treasures. I took home a pert and moist ball of fresh cow’s milk mozzarella from Tonjes Family Dairy, syrupy, marble-like canadice grapes  from Buzzard Crest Vineyards, a handful of Eckerton Hill Farm sungold tomatoes and a crusty wholewheat baguette for a little French picnic. 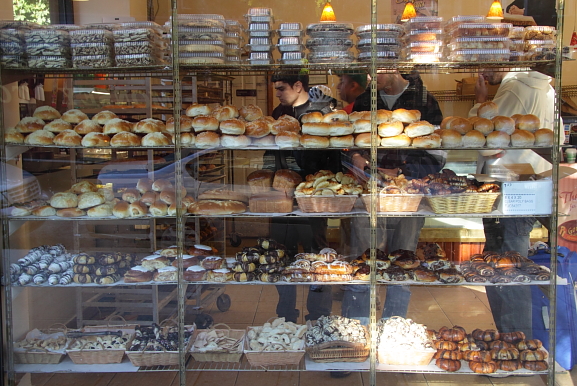 Early on Sunday morning, cycling through Brooklyn’s sleepy streets, I rolled into Crown Heights, a Jewish corner of the borough. Having been missing Cheskie’s top-notch kosher treats since our departure from Montreal, the cravings for a quality heimishe bakery had been niggling at me. Sadly, there’s no patch for this addiction. After a quick chat with a local, I was pointed in the direction of Gombo’s Heimishe Bakery, which was surprisingly busy considering the hour. The store was almost without sound as drowsy-eyed customers filled coffee cups and helped themselves to the self-serve bakery ‘wall’. Rugelach, danishes, challah, oh my! Sadly, they don’t stock any poppyseed products, a personal favourite, so I settled with a perfectly moist and flavoursome cinnamon roll. You can grab all the usual kosher breads and cookies, all very reasonably priced. 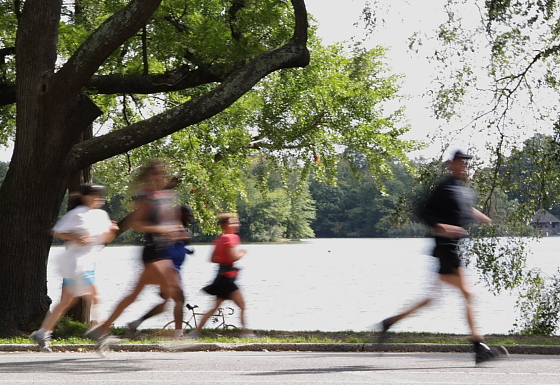 After circumnavigating the expansive borough, I pedalled into Prospect Park, legs yearning for a break. Clearly peak hour on the park’s circuit, cyclists, joggers and horseback riders sped (or clopped) by me as a group of bodies moved perfectly in time together practising tai chi on the lakeshore. It’s certainly a picturesque and somewhat quieter alternative to Central Park on the weekend. Reaching the northernmost tip of the park at Grand Army Plaza, I suddenly found myself amongst masses of people lining up for a bakers dozen of food trucks. 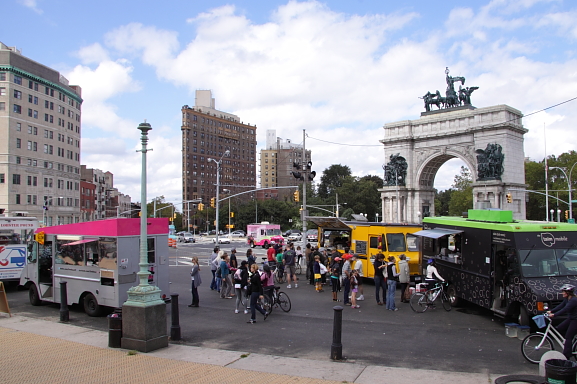 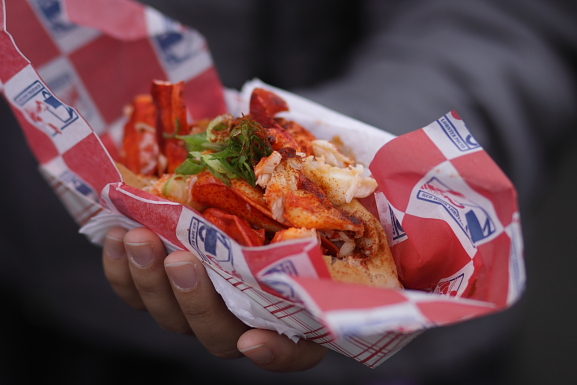 The Prospect Park Food Truck Rally… it was just waiting for me to stumble upon it. Held on the third Sunday of each month, many of New York’s most popular food trucks congregate at the south end of Grand Army Plaza to offer up their goodies. Many people came down for the occasion, picnic rugs and all, others were finishing off their morning’s exercise and looking to sate their appetites. A brisk fall day meant the queues were pretty skinny at Kelvin’s Natural Slush and Van Leeuwen Ice Cream, although their flavours have been the cause for much hype and acclaim. Hungry customers were lining up in hoards for Rickshaw Dumplings’ pork/chive and chicken/thai basil creations and Gorilla Cheese NYC’s elaborate grilled cheeses – try smoked gouda with BBQ pulled pork and onions or imported asiago with prosciutto di Parma and aioli. 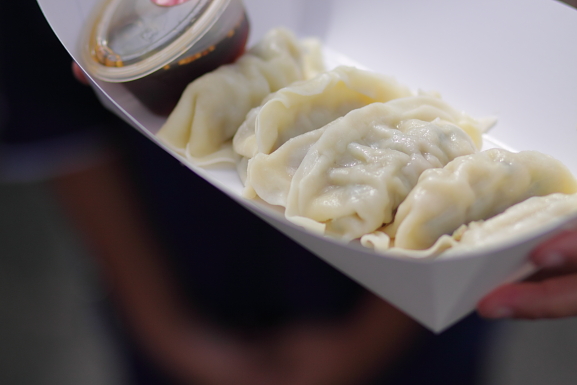 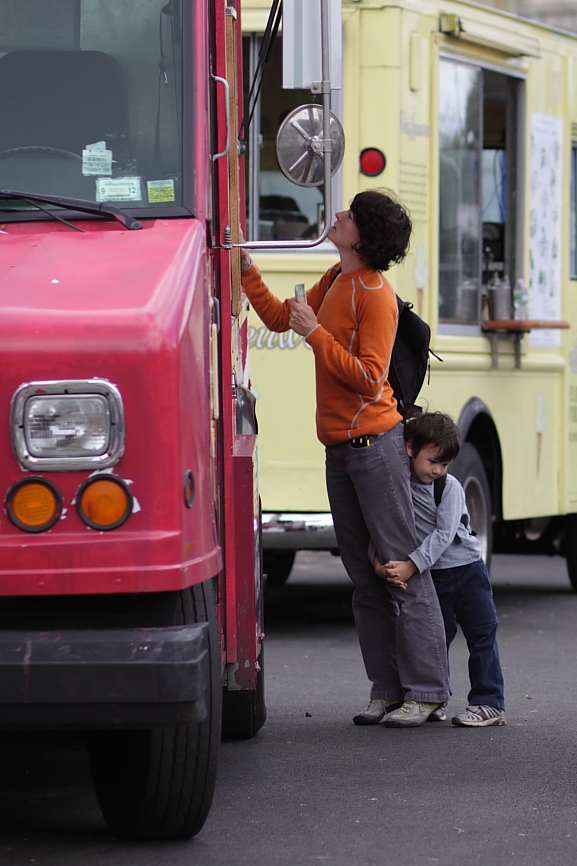 While I was tempted by Red Hook Lobster Pound’s Maine- and Connecticut-style lobster rolls, and the sweet fragrance of Wafels and Dinges nearly hypnotised me (and clearly many others), I settled with a selection of asian-spiced tacos from Kimchi Taco. You can choose from sweet marinated Korean BBQ beef, pork tenderloin, pulled chicken or tofu edamame falafel which all come topped with their house-made kimchi made with pepper flakes from the chef’s grandmother’s farm in South Korea. The vegetarian in me doesn’t like to admit that the pork certainly boasted a richer flavour than the falafel. Spicy, juicy and filling, my body thanked me as a tucked into the feast. It’s a rare occasion that you get to take advantage of so many food trucks at the same time. The last rally is being held on 16 October before winter kicks in, but you can follow most trucks now on Twitter. 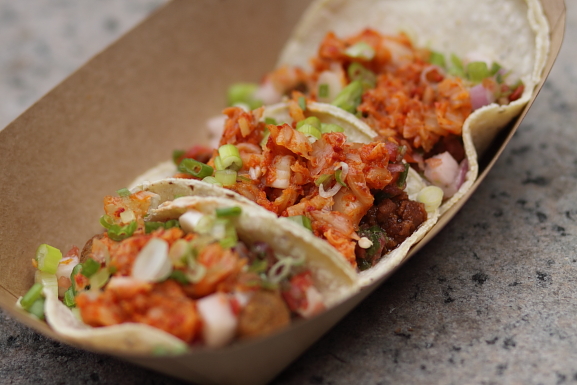 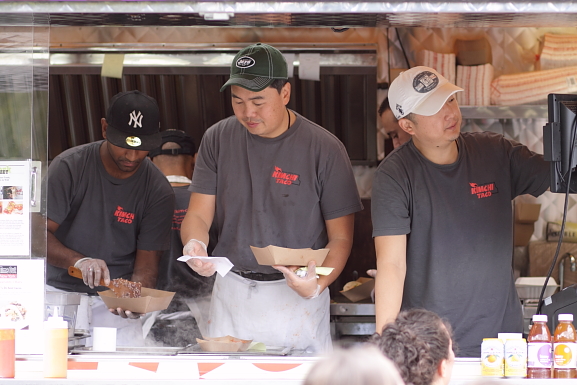 As usual, each trip to New York I uncover barely a handful of places and pass by countless more. Overwhelming choice or endless possibility – it just depends how you look at it. Choosing just one – well these days it’s as hard as choosing an ice cream sandwich… 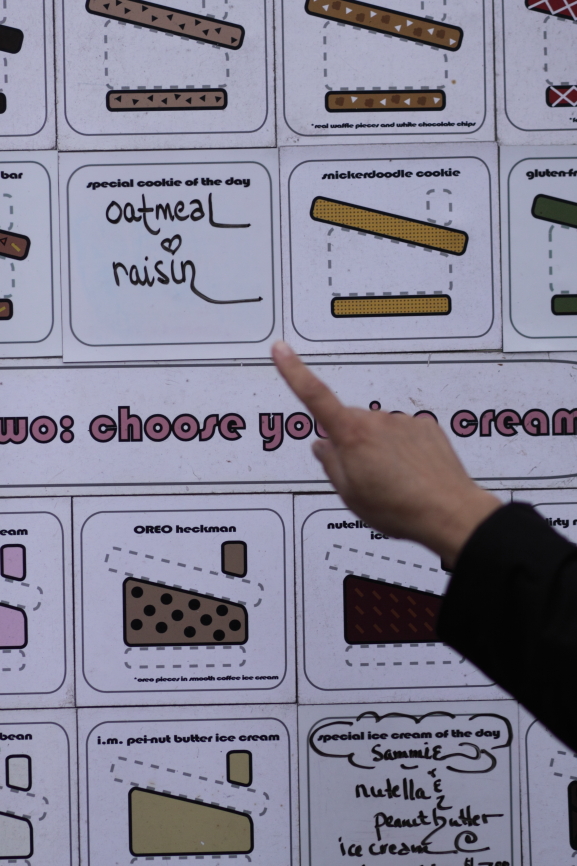